CASE ANALYSIS OF COLLISION CAUSED BY CAR BACKING UP

FACTS OF THE CASE:

Plaintiff was driving her SUV northbound in an alley at a speed no more than fifteen miles per hour. Defendant, driving a sports sedan, backed out of his private garage and into the alley. Plaintiff had no time to stop and was struck by the right rear of Defendant’s vehicle. Plaintiff sustained injuries as a result of this collision and sought medical care as outlined below.

Plaintiff was traveling under the fifteen mile per hour speed limit and was already slowing down approaching the avenue which was only two properties away from the end of the block. Plaintiff’s view was obstructed by the wall of the garage from which Defendant was backing from. It is the duty of the driver that is coming from a private garage to make sure to yield the right of way and that it is safe before entering the road, as stated in Cal. Vehicle Code §21804(a), failure to “yield the right of way” from an alley and §22106, unsafe backing.

NATURE AND EXTENT OF DAMAGES

Plaintiff suffered trauma to her head, neck and upper and mid-back pain as a result of this collision. Her head injury resulted in constant throbbing headaches with dizziness. Following the accident she sought treatment from a doctor. Based on said diagnoses, Plaintiff received physical therapy.

Due to Plaintiff’s complaints of dizziness and headaches she was referred by her doctor to a neurologist. He diagnosed Plaintiff with post traumatic dizziness and headaches, cervical sprain, and dorsolumbar sprain. He ordered an MRI of the C-Spine as well as electrodiagnostic studies which was very painful for Plaintiff. Plaintiff returned several months later for re-examination by her doctor and still complained of a number eight out of ten on a pain scale.

Plaintiff is still suffering from neck pain as well as recurring headaches and dizziness. She is unable to sit at her computer for prolonged periods. Additionally, Plaintiff is no longer able to babysit her grandchildren. Driving for prolonged periods and performing simple household tasks are still difficult and painful. Plaintiff will follow up an Orthopedic Specialist, for her residual symptoms.

THIS CASE WAS SETTLED OUT OF COURT, AND THE CLIENT GOT THE MONEY THEY DESERVED!

FACTS OF THE CASE:

Plaintiff entered a parking lot with her vehicle. Plaintiff parked the car in the parking lot and proceeded to retrieve an item from her trunk. Once she was at her trunk and facing toward the front of her vehicle, she was struck by another vehicle. The other vehicle was driven by Defendant. Defendant was exiting a parking space from within the same parking lot and reversed directly into Plaintiff. The vehicle struck both of Plaintiff’s knees and pinned them in between the two vehicles. Plaintiff believes Defendant exited a parking space approximately five car lengths from the point of impact, thereby allowing Defendant’s car to pick up speed. Plaintiff was in immediate excruciating pain. The fire department and ambulance arrived and took her to the emergency room. Plaintiff suffered significant injuries to both of her knees. 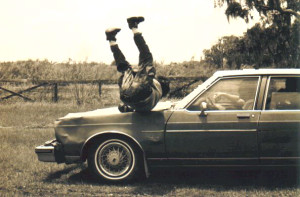 Plaintiff was a negligent free pedestrian at the time of the accident. Defendant backed into Plaintiff as she was standing at the rear of her stopped vehicle. In Plaintiff’s follow up with a doctor, and he advised her that the MRI revealed a tear of the anterior cruciate ligament and that the menisci were normal. An intermediate grade tear of the proximal fibular collateral ligament was noted as well. There was also micro fracture edema seen in the distal femoral meta epiphysis. The doctor noted that limited extension capability persisted to her right knee. Due to her continued pain and lack of ability to flex her right knee, Plaintiff selected a renown orthopedic surgeon and was advised that the MRI further demonstrates a right knee ACL tear.

This accident took a significant toll on Plaintiff and her family.

As indicated above, Plaintiff still experiences pain to her knee on a daily basis when going up and down the stairs and when walking for more than a few blocks. Future surgery to the right knee is likely.

THIS CASE WAS SETTLED OUT OF COURT, AND THE CLIENT GOT THE MONEY THEY DESERVED!